You are here:   Ribbon Creator

RibbonCreator is a WYSIWYG interface for the development of ribbons. RibbonCreator has been developed in VB2005 and requires .NET Framework 2.0. 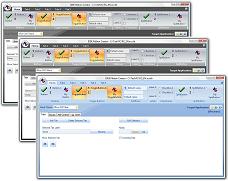 It supports creation of customised ribbons for following controls:

You can select images for controls using the appropriate dialog (Office idMso internal images). Also user-defined images for ribbon controls can be selected and written to a table within an Access database.

You can create Screentips, Supertips and Keytips for controls supporting this feature

You can select Control-idMso commands for Access, Excel and Word for the Ribbon-Controls: Groups, Button, ToggleButton, SplitButton, and Gallery.

The generated Ribbon XML can be exported directly into an Access 2007 database, including user-defined images if desired. Callbacks will be imported and the required office references will be set automatically.

Another option is to save a ribbon as a Word document (. docm), Word template (.dotm), Excel worksheet (.xlsm) or Excel template (.xltm). Both the images chosen as well as the required callbacks will be integrated.

The Ribbon XML can also be saved as XML file.

Ribbon XML created with Access, Excel or Word can be loaded and modified by RibbonCreator.

An integrated callback editor to manipulate callbacks (Access only) is included. In addition, the callback call for each control can be edited individually.

RibbonCreator will be enhanced and extended continuously, please check this site for updates.

More screenshots can be found ...here

The shareware version is restricted to two tabs, three groups and ten controls.